Southern Germany in early autumn, 9 CE. Three Roman legions with auxiliary troops and the governor of Germania, Publius Quinctilius Varus, are on their way from summer campaigns to safe winter camps on the Rhine and Lippe rivers.

Suddenly, a well-planned surprise attack by a large force of Germanic warriors from a coalition of tribes attack the Roman army, inflicting substantial casualties and causing it to embark on forced marches through the woodlands under continued attacks from the Germans. The difficult terrain made the Roman line of march stretch out perilously long and easy to attack on its weak spots.

The precise circumstances of the battle are unclear but many things suggest that the Romans were led into a very well prepared trap in the form of a narrowing funnel. At its end was a gap just about 100 meters wide between the densely forested Kalkriese hill and a vast marshland. The gap was prepared as a kill zone by the Germans, having built a defence wall along the hillside from which they could attack the desperate, fleeing remains of the Roman army, which was annihilated here.

An enormous disaster to the Romans, the defeat had vast consequences and ended a long period of expansion. It is said to have shook emperor Augustus profoundly. Though maybe not such a pivotal turning point as much earlier history-writing claimed, the event seems to have put an end to ideas about turning the lands between the Rhine and the Elbe into a formal Roman province, now establishing the Rhine as the northern limes of the empire. 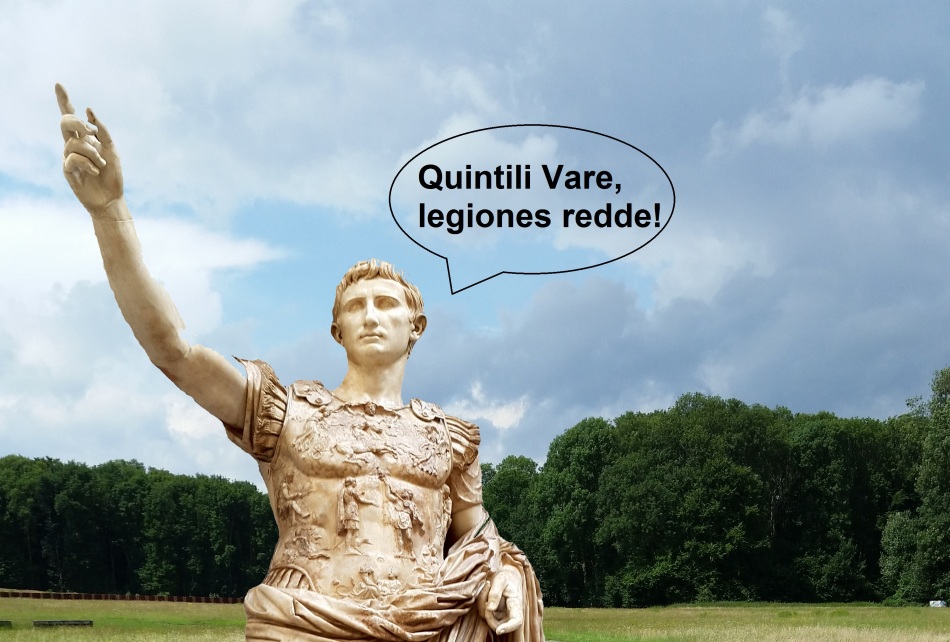 The probable scene of the final battle at Kalkriese is known because of archaeological excavations in the area since the late 1980s. The discovery and investigation of the battlefield was certainly a major discovery of the late 20th century, following a more than 100 years long debate on where and how the battle was fought.

Thousands of finds of debris of Roman equipment have been collected, elucidating a lot about what happened. They give fascinating insight into many aspects of the human drama of the events. A donkey bell stuffed with straw to silence it tells about futile attempts to avoid discovery while marching. Small stashes of buried coins in one part of the area seem to indicate the place for a last stand of a Roman unit, burying their valuables when knowing there was no chance of escape.

As an example of the political and more specifically nationalistic uses of history, there are few things more important in German historiography than the Teutoburg battle. The events, in which a “Germanic hero” united (a few of) the Germanic tribes to drive out the Roman occupants was heavily exploited during the 19th and early 20th century.

There is a well conceived visitor’s centre in Kalkriese, where some of the finds are displayed, but the main experience of visiting is a prepared walk where you get to follow in the footsteps of the legionaries on their last kilometres, ending in the narrow gap in which they were finally caught and met their doom. This is very dark history of course, and the place was a site of panic, desperation and terrible suffering rather than heroism. A site design where you follow a track of large, rusty, iron plates guides the experience firmly and sets the tone while remaining respectful.

We came here on a late summer day on which disaster seemed far away. We walked the iron plates over sunny, open grassland beneath the forest rim and though a gripping experience, panic seemed far away. Going back on a narrow track through the edge of the forest, a sudden shift of weather delivered thunder and massive, chilly downpour, sending us running back to the visitor’s centre through the dark woods in appropriate desperation.